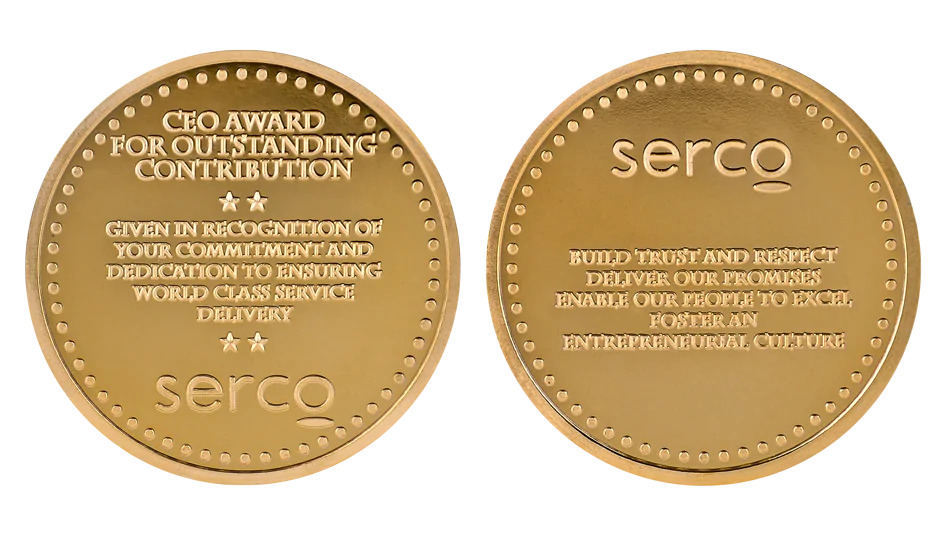 Adding special meaning to a celebration can be done by offering commemorative gifts at the reception. Custom coins are one of the best options to choose for this purpose. They are much more than a meaningless giveaway. With the custom coins’ help, it’s possible to celebrate an anniversary or encourage distinguished employees for future endeavors. We mint custom-made commemorative coins from different materials, including precious metals. The design of custom coins might also be diverse, they may contain company emblems, trademark colors, images, inscriptions, etc. Coin USA offers a glimpse into some celebrations where custom coins made in our mint have been a chic add-on to the celebration day.

Custom Coins Made for Anniversaries

The 50th anniversary of the first Moon landing is a momentous event in the history of human discoveries and adventures. To commemorate the achievement and honor its anniversary in a special way, NASA decided to have custom coins embossed. Two custom coins of excellent quality were made on earth and delivered to the International Space Station. While there, the spacy custom coins flew around our planet for 28 days, and at the expiration of the term, they were sent back to Earth.

These custom-made commemorative coins mark the moment when Neil Armstrong, Buzz Aldrin, and Michael Collins first landed on the Moon. The front side of the custom coins depicted the curved profile of the astronaut’s helmet, the American flag, and an image of Neil Armstrong walking on the Moon. The back side of the custom coins featured Buzz Aldrin’s footprint on the surface of the Moon. Enthusiastic officials say they’re already wishing for a time when similar custom coins will be made to honor NASA astronauts landing on Mars.

A great way to commemorate the merits of distinguished employees is to give them custom coins with individual designs. “Personalized” coin design, because it is possible to mint absolutely any image of the employee or a mention of their merits on the surface of their own custom coins.

The producers of the musical “Hamilton” about America’s founding father, Alexander Hamilton, decided to give custom coins to their cast and crew. This way they intended to unconventionally thank them for their participation in the show. The production received critical acclaim on Broadway, and producers wished to celebrate this with the custom coins’ production.

We minted the custom-made commemorative coins of the solid metal. The busts of Lin-Manuel Miranda and Leslie Odom, Jr. who played Alexander Hamilton and Aaron Burr, respectively, are stamped on the front and back sides of the custom coins. The outer edge of the custom coins are adorned with inscriptions, containing words from the musical’s songs, “Death makes no distinction between sinners and saints” on one side, and “History erases all the pictures it paints of me and my mistakes” on the other. Petal notches ornament the custom coins’ border. Antique brass and sterling silver finishes complete the exclusive appearance of these custom-made commemorative coins.

As the saying goes, the customer is always right. And it’s also right that many organizations choose to celebrate their customers by minting custom coins just for them. World-famous McDonald’s decided to pay tribute to their customers and the much-loved Big Mac with custom coins. They served for an interesting sales gig: In exchange for custom coins, clients received tasty Big Macs. The fast-food restaurant salutes both; the most popular dish that has been on the menu for many years and its devoted buyers.The “McCoin” a coin maker made from brass and produced in five collectible versions further entice customers.

General Motors decided to commemorate the launch of the new Corvette and asked us as an American coin maker to mint custom coins to commemorate the event. Designed to pay tribute to the car’s long history and, of course, the joyous addition to the Corvette family, custom-made commemorative coins appeared the perfectly fitting object.

Their front side decorated with crossed flags — the Corvette emblem. The back side of the custom coins featured an embossed image of the company’s first chief engineer. An original Corvette signature embellished the picture. Crafted in brass, embossed on both sides and plated in .999 Fine Silver, the custom coins were issued 12 different variations achieved by adding enamel color.

If your organization would like to mint custom coins to celebrate a significant event, our Coin Configurator is at your fingertips. Model the custom-made commemorative coins yourself, and our team of qualified coin designers and coin makers will bring them to perfection!

Disclaimer: Our products on this page are known as “Coins” in order to comply with general linguistic usage. It should be expressly pointed out that it concerns, however, individually embossed medals and no current or former means of payment/currency.